WASHINGTON – The U.S. Department of Housing and Urban Development (HUD) and the American Institute of Architects (AIA) today announced the winners of the 2018 HUD Secretary’s Housing and Community Design Award. HUD and the AIA selected affordable housing developments in California and Oregon for their overall excellence in either affordable housing design or housing accessibility.

“I want to recognize these outstanding developments for their architectural ingenuity and the impact that they’re making on their communities,” said HUD Secretary Ben Carson. “These developments not only provide critically needed affordable housing to low-income families and individuals with disabilities, they prove affordable housing can be attractive and responsive to the needs of their communities.”

Excellence in Affordable Housing Design – This award recognizes architecture that demonstrates overall excellence in terms of design in response to both the needs and constraints of affordable housing. 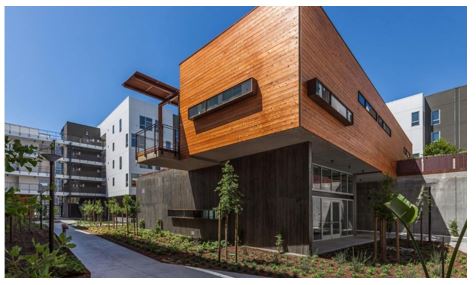 Five88 Apartments in San Francisco is a new 100 percent affordable housing development, skillfully constructed on a coastal landfill. The development includes 200 apartments for low-income families in the developing Mission Bay area. Built on challenging landscape the architectural design of the development is both innovative and visually striking.

The building transitions from four stories on one side to three on the other. From uniquely tilted stairs to a bamboo exterior, this affordable housing unit combines functionality with an aesthetic appeal. Five88 includes 10,000-square feet of retail space aiding in the development of the community. This development is transit-oriented and focused on enabling low-income families to move closer to the city and the places most important to them.

Housing Accessibility – Alan J. Rothman Award – The purpose of this award is to recognize exemplary projects that demonstrate excellence in improving housing accessibility for people with disabilities.

The Station 162 Apartments near Portland, Oregon is the fifth housing project developed by QUAD, Inc (Quadriplegics United Against Dependency). The person behind this endeavor, Bud Myers, is himself quadriplegic and realized the critical shortage of independent housing developments to aid injured individuals transitioning to a life with disabilities. Ten years before the passage of the Americans with Disabilities Act, with help from community resources he opened the first independent living center in the nation not affiliated with a hospital or rehabilitation center.

The Station 162 Apartments feature everything the Americans with Disabilities Act established including entirely barrier-free units and independent supportive services provided upon request.

Larger than Quad’s previous developments, this complex was designed with the needs of their future residents in mind and has gained national attention for its efforts.

HUD’s mission is to create strong, sustainable, inclusive communities and quality affordable homes for all.
More information about HUD and its programs is available on the Internet
at www.hud.gov and https://espanol.hud.gov.

How We Work with Banks

How We Work with Nonprofits